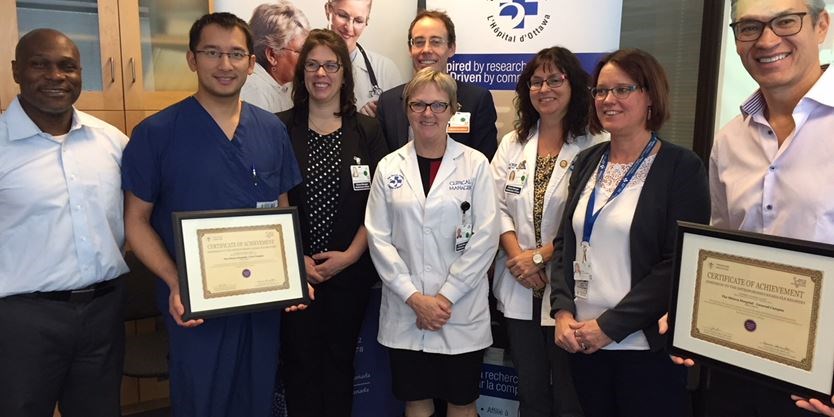 The Ottawa Hospital has been recognized for its work in preventing bone fractures.

The certificate of achievement acknowledges the hospital’s implementation of a fracture screening and prevention program.

“Basically, once someone has a fragility fracture there’s a high chance someone will have another one, and we’re trying to intervene in that regard to prevent that second fracture, or a more significant fracture from occurring in the future,” said Dr. Paul Kim, leader of the program at the hospital’s General campus.

The program was developed through the Ontario Osteoporosis Strategy and operates in 36 fracture clinics across Ontario, including at the General and Civic campuses.

Not all fractures are caused by osteoporosis, a disease that is characterized by low bone mass and deterioration of bone tissue, but the program aims to detect whether a patient has it to prevent other fractures.

The General started the program in January 2007 and the Civic started screening the following April. At both sites, 4,293 people have been screened.

According to a press release, the certificate recognizes Canadian hospitals that are committed to identifying, investigating and initiating treatment to prevent future fractures.

After someone comes into the hospital with a fracture, Kim said, nurses or clinical representatives approach patients to see if they’ve received osteoporosis care to improve bone health. Generally, a bone density scan can be completed to determine whether any preventive treatment is needed.

In Ontario there are about 60,000 fragility fractures annually, Kim said.

“Often it’s a sign that when you have one of these fractures occurring you’re at a higher risk of having another one.”

For example, if a patient has a wrist fracture, there is a 38-per-cent chance of them having another one within five years.

The program is trying to prevent that.

More than 8,000 people in Ontario are screened through the program each year.

For more information about the program and the Ontario Osteoporosis Strategy, visit osteostrategy.on.ca.

Melissa Murray is a reporter with the Ottawa West News. She can be reached at mmurray@metroland.com